Glasgow named one the UK’s most affordable cities

It’s official – Glasgow is one of the most affordable places in the UK to live.

New research from Lloyds Banking Group names the city the ninth most affordable in the United Kingdom – and second only to Stirling in Scotland.

Glasgow expert in property law Jatinder Chall of MacRae & Kaur believes the news is critical to the city’s economic future.

Average UK house prices in cities have outpaced wage growth for five years in a row and are now more than seven times annual earnings.

This ratio falls to 5.2 in Glasgow– making Scotland’s largest city a third more affordable than the average UK city.

Across the nation the ratio is only bettered by Scotland’s former capital Stirling, Bradford, Durham, Sunderland, Hereford, Lisburn and Londonderry.

This comes despite Glasgow house prices rising 22% over the past five years – £32,000 in cash terms – whilst wages rose just 7% in the same period.

“Glasgow isn’t just a great place to live, it’s a very affordable one – and ultimately that can only benefit our economy.

“Home affordability has been worsening for the past four years and nationally is now at its worst level since 2008, with city living in particular becoming increasingly expensive.

“That Glasgow is bucking that trend is very good news for our local economy as attracting and retaining skilled workers and modern businesses is critical to both the city and Scotland’s economic future.

“There’s plenty of evidence that our Glasgow is increasingly becoming a destination of choice for just these kinds of companies and professionals – and even this week our team have been talking to Londoners looking to relocate here.”

With 25 years experience the firm has successfully organised multi-million-pound developments throughout the UK and managed business expansion and movement of premises throughout Glasgow.

MOVING HOUSE: YOUR GUIDE TO THE LAW
A handy, easy to follow guide for home buyers and sellers
download 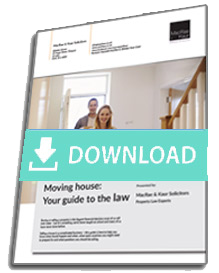 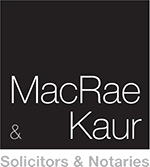 Property Solicitor Glasgow | Conveyancing | Lawyer | Situated in Glasgow City Centre.
‍Tel: 0141 611 6000
info@mackaur.co.uk
Fax:0141 319 8702
DXGW533
Submit an offer
MacRae & Kaur LLP is a limited liability partnership registered in Scotland number S0303675. Registered office 45 Hope Street, Glasgow, G2 6AE. A list of members is available for inspection at the Registered Office. References to “Partner” are to a member of the LLP. Authorised and regulated by the Law Society of Scotland, the Solicitors Regulation Authority and the Financial Conduct Authority.